We spent the morning at Shotley marina in Harwich harbour. This used to be the site of HMS Ganges, which trained boys for the Navy. The original HMS Ganges was an 84 gun second rate ship of the line built of teak in Bombay in 1821; she was the last of the Royal Navy's sailing ships to act as an admiral's flagship. When it had become clear to all that the day of the wooden sailing warship was past, she was moored off Shotley and used as a training ship. The training establishment came ashore in 1905 and lasted at Shotley till 1976. From what I have heard their methods were fairly robust, but no doubt effective with those cut out for a successful naval career.


When the old Ganges was broken up in 1930 the captain's cabin was used to create an extension to Burgh Island hotel in Devon while other bits of her timber suffered the indignity of being used to make trinkets for souvenirs. Bonita has a teak ashtray that came from the Ganges, complete with a brass plaque confirming its pedigree. The picture to the left shows Alice in Shotley marina holding our minute remnant of the old man of war. 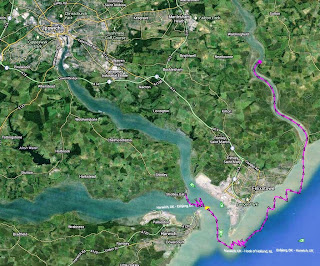 There has been a steady stream of gaffers heading up the River Orwell for the festivities at Ipswich this weekend, but before joining them we felt we should visit the lovely River Deben which Alice had not seen before. After the excitement of crossing the choppy waters of the bar in a brisk breeze we anchored for the night up the river surrounded by the peaceful Suffolk countryside.

Posted by Unknown at 23:17
Email ThisBlogThis!Share to TwitterShare to FacebookShare to Pinterest