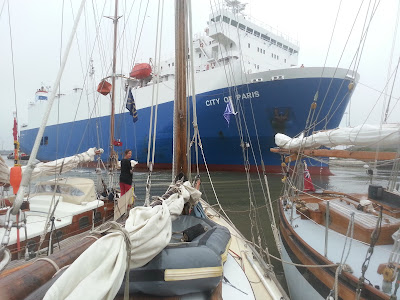 Our hosts the Grimsby and Cleethorpes yacht club share the dock with these huge car transporters that come and go several times a day. They seem to pass very close to the yachts.  They are clearly very carefully handled, but there's the uncomfortable feeling that somewhere high up on the bridge an inadvertent twitch of a lever could reduce the entire yacht club and a fair number of visiting gaffers to matchwood; much as happened just a week ago when the bulk carrier Cyprus Cement became entangled with Levanger marina in Norway, an event which was caught on video here. Fortunately, we remind ourselves, such events are very rare!

There is some other new industry in Grimsby including work with wind farms, but looking around it is clear the town has been hit hard by the collapse of the deep sea fishing industry. There is an excellent Heritage Museum of fishing complete with an old trawler floating in a disused dock. The museum tells the story of how the old fishermen faced great hardships in the stormy northern waters around the Faroe islands and Iceland. They had to go so far, of course, as nearer waters had already been fished out, so maybe it should have been seen earlier that the industry was not sustainable.  There are signs of regeneration including some new marine works to serve the offshore wind turbines but its obvious there is still a lot to do to revive the local economy.

Sadly Sian and Ant had to leave today to return to the pressures of normal life. They have helped to bring Bonita a long way down the East coast from Newcastle, and we were all surprised at the interest and variety to be found in sailing these waters.

The photo shows the departing crew in their much prized sponsor shirts. Observant readers of this blog will also notice this was a rare day - sufficiently warm for the whole crew to be in shorts! Even though the rest of the country has, it seems, been suffering in the heat, we have been kept cool at sea on the East coast.

Fresh crew are due tomorrow!
Posted by Bonita: Travels of a Victorian Yacht at 00:14