Fog and wind in the Orkneys

We woke at 5am with every intention of making an early start and catching the tide.  However it was blowing a brisk N wind and there was fog so thick you could hardly see across the harbour. We decided to wait a few hours but both the forecast and the conditions on the ground deteriorated through the day so we decided to be sensible and await better weather.  Readers of previous blogs may recognise a familiar pattern.

We went to the Music Festival service in St Magnus cathedral.  The Festival has bought many visitors to Kirkwall. The magnificent 12th century building was packed and the choir were no doubt well rehearsed for the occasion. 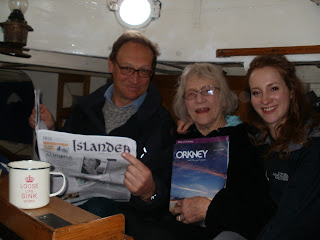 Mum and Emma had to fly back home in the afternoon, but were able to visit Bonita’s cosy cabin before they left. The picture shows Tim, Mum and Emma around the cabin table. Mum has been putting up with Bonita’s discomforts (intermittently) since 1946 although there have undoubtedly been a few improvements over the years.


The second photo gives an  insight into Captain Cook's voyages of discovery.  It is a set 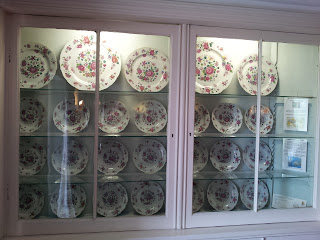 of high quality china plates and bowls which were taken on the voyage and were given, or perhaps more likely sold, to the Laird of Skaill House near Stromness at the end of the 1780 expedition. This was Cook's third voyage during which he died.  His ship, the Resolution, put into Stromness harbour at the end of the trip.  Cook was a no-nonsense Yorkshireman, one of the greatest and most experienced seaman that ever lived who sailed all round the world in small converted collier ships. We found it surprising that he had not only taken a complete set of high quality chinaware with him, but also that they are decorated with a most unseamanlike pink floral pattern. Also remarkable is that so much has survived the long and difficult voyage to be bought back safely in good condition.

We wondered when these dishes were used, or perhaps they never were, which might explain why they survived.  Cook would surely have had little opportunity to entertain senior European visitors or other Naval officers. Was it so important that they had to carry high quality crockery just in case?  Did they bring out the china if they invited native chieftains aboard?  Did Cook and his officers maybe eat off the best pink floral crockery when dining in some sheltered anchorage after a successful day charting the unknown?  For whatever reason, Cook, the rational pragmatist, thought these pieces were worth the space they took up when preparing for a long and dangerous voyage on his overcrowded little ship.

As this blog is written the wind is howling in the rigging, the rain is horizontal and the boats are rolling around in the marina. This makes us grateful we decided to stay put for a bit.
Posted by Bonita: Travels of a Victorian Yacht at 20:13