When she first sailed, Bonita's most technical equipment was a brass spinner that she dragged behind her on a line. Its rotation was transferred to a set of gears and an analogue (i.e. clockface) that showed her speed in knots. On this circumnavigation, Bonita contains ~50 times the computing power used by Apollo 11. But we have discovered that power without communication is useless - the maps of data coverage from our 3 mobile providers seem to be founded on fantasy.

The Western Isles are, however full of wonderfully friendly & helpful people and none more so than lovely Portree. Gregor & Kirsty at hostelskye.co.uk where we showered gave us the lowdown on local wifi spots. Pick of the bunch was at skyeyouthdropin.co.uk where Eilidh & Elena supplied us with faster internet than some of us have at home!

Once we had connectivity, we were able to use all of the capabilities - poor rivals to a reefed beam reach in a sunny Force 4 like yesterday - but useful when you're stuck in port with a bad weather forecast like we are today...

We are using:
- Dropbox - a totally reliable of saving data 'in the cloud' (and off the high seas!)
- Blogger.com - whatever the data coverage, the skipper's blogposts get through...
- Android - the operating and data sharing system used by all 5 of our computers
- iAIs.com - position reporting which, like Pony Express, almost always gets through
- SkypeOut - a local charge call to ring in Canada, Saudi, London or anywhere

Even with the great knowledge and experience we have on board, it is mind boggling to step back 60 years and see what we can do now. Go back twice that time and it would have seemed like magic!

The picture below shows Tim checking that it really is Ardnamurchan Point on our starboard beam: 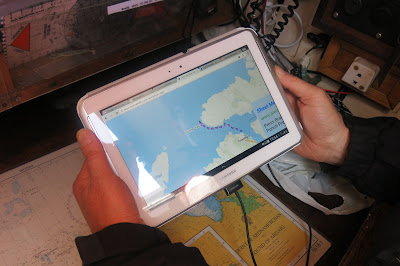 Posted by Bonita: Travels of a Victorian Yacht at 16:24
Email ThisBlogThis!Share to TwitterShare to FacebookShare to Pinterest