A day spent in Kirkwall, the capital of the Orkneys. This small but lively city is dominated by St Magnus' cathedral, a fine Norman building in massive red sandstone. 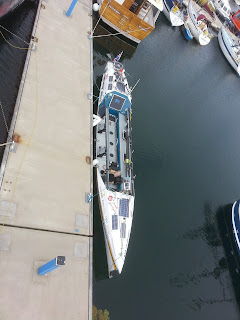 shows a rowing boat in which four Icelanders are attempting to row from Norway to America. www.northatlanticrow.com  She is in the harbour next to Bonita.  The rowers left Norway and arrived at Orkney after a week at sea. Next stop the Faroes. This will be the first time this trip has ever been done in a rowing boat. The Vikings don't count as they very sensibly hoisted sail whenever they had a fair wind. We talked to the captain of this little vessel and his wife who manages the shore operation. We felt their experiences were admirable but not enviable. They may well have thought the same about us. The rowers have to eat 7,000 calories a day even when seasick: they seem to live mostly on chocolate bars to achieve this. 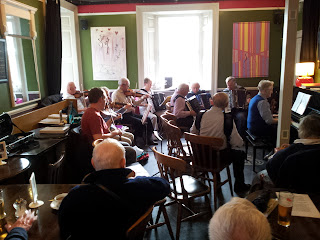 The second picture shows what might be the Kirkwall fringe. An accordion and fiddle group in full flow in Reels pub.

We are expecting visitors tomorrow so called in at the launderette. I also went up the mast in the bosun's chair to check all was well after about a thousand miles of sailing.

Posted by Bonita: Travels of a Victorian Yacht at 21:25