A day spent exploring Kirkwall and its surroundings, and welcoming Mum and Mem who flew up from London to be with us on the midsummer weekend.

The photo shows another old boat in harbour - a  magnificent 58 ft 100 square metre yacht built by Abeking and Rasmussen in Germany in 1936. Originally named 'Pelikan' she was built for the Luftwaffe who used her for training navigators. After the war she was one of the 'windfall' yachts acquired by the British after the fall of Nazi Germany and which needed new owners who were in a position to be able to look after them; for a while she was owned by the Royal Engineers who renamed her 'Overlord'. She has been very well looked after by a syndicate of owners. We were shown over her and were impressed by the high quality of all the work, although with six to ten people aboard living would be cosy. She had come to Orkney in a single hop, four and a half days up the North Sea from the Hamble. 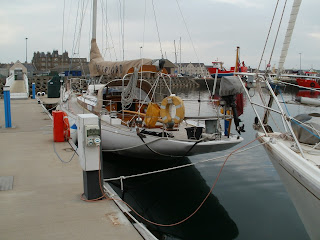 The second picture shows the festival all girl folk group Gria playing under a marquee to an appreciative audience. They seemed very young but we were impressed by their skill and musicianship and the delicacy of some of their songs. Personally I was a little disappointed to see one of them enjoying a cigarette outside during the interval, which seemed a sad contrast to the image they wanted to convey. 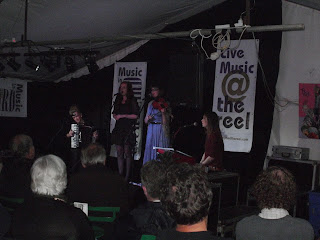 In the evening we had supper with our friend Daniel who plays in a large orchestra and is here for the festival and has many entertaining stories about life behind the polished professional performances.

In the harbour as always Bonita has been much admired, and I am often asked what she is made of. This always presents a dilemma. If I reply 'wood' I cause offence to anyone with any knowledge of old boats. If I say ' pitch pine on oak sawn frames with  rock elm steamed frames'  the casual enquirer thinks I am being too clever and loses interest.  I felt on safer ground today with the admirer who just said  'shes made of concrete, isnt she?' .


Posted by Bonita: Travels of a Victorian Yacht at 00:12
Email ThisBlogThis!Share to TwitterShare to FacebookShare to Pinterest