After a couple of quiet days in Tobermory, today was a busier day. We started by saying goodbye to D who had to return home and could no longer be spared from the  demands  of rheumatology in Basingstoke. Tim had a meeting about a possible pier extension in Tobermory harbour, and then we left in light winds.

We passed Ardnamurchan Point, which was an emotional moment.  Ardnamurchan Point is not only the most westerly point of the British mainland, but is also a familiar name to everyone who loves the radio 4 shipping forecasts. This momentous occasion was appropriately marked by a cup of tea and slices of  Thistledown cake.

Thistledown cake is special and has to be reserved for special occasions when things are either going very well or very badly. We then motored most of the way in hot sun and light airs to Mallaig,  past the spectacular mountainous islands of Muck, Eigg and Rhum. A couple of miles short of Mallaig we put the dinghy over the side and rowed round Bonita, gliding along under full sail, taking photographs to further decorate the blog. 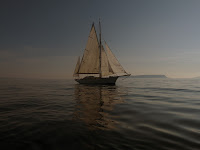 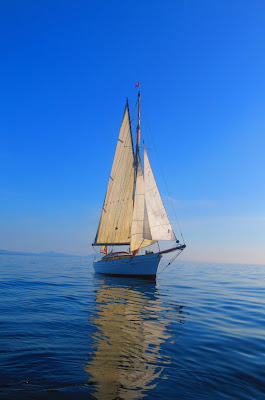 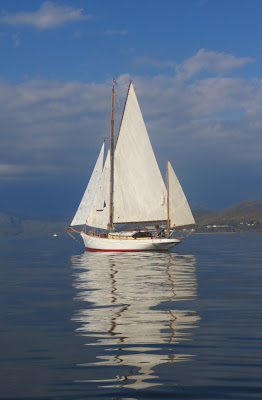 We then  entered the small harbour of Mallaig, where Bonita's lack of manouverability under power became apparent to all, but luckily as so often admiring volunteers appeared  to take her mooring lines, and all was well.
Posted by Bonita: Travels of a Victorian Yacht at 22:24