Today  was a rest day so we hired a car and set off on a tour of the island; first stop
was a traditional 'Black House' so called because it was built of dry stone walling . These houses have no windows, the roofs are of peat and there is an open peat fire in the middle with no chimney. The whole house was full of smoke which cannot have been very good for the inhabitants' health. People were living in these houses until the 1970s. The picture gives an impression of the inside of the house which was warm and cosy but lacking even the few amenities that we take for granted on Bonita.
We later visited a reconstruction of an iron age house based on archeological excavations of remains from about 800 BC. This too had a open peat fire with the smoke somehow finding its way out through the peat roof. There didn't seem to have been much progress between the iron age house and the Black houses which were common in the 19th century so far as living standards were concerned. In the iron age house we were fortunate to talk to a genuine inhabitant (Elizabeth) who was extremely well informed about how life was lived here almost 3,000 years ago. Elizabeth spends all her day in the peat smoke, and then goes home on the bus. We worried about the state of her lungs and speculated about health and safety at work.

Other highlights of our tour included a visit to the standing stones at Callanish. These are stone circles of massive upright stones about 5,000 years old. This is about the same age as Stonehenge, and presumably the stones served some kind of ritual or astronomical purpose, but no one really knows. They were in use for about a thousand years: there are few structures built today which are likely to be still serving their designed purpose in a thousand years time. 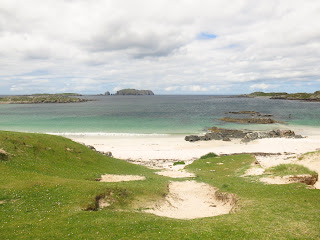 The final highlights of the day were the spectacular views over the rugged landscape, and the wild Atlantic waters beyond. After a day contemplating the mysteries of prehistory we returned to Stornoway and spent a jovial evening in the Royal Hotel with Barry Healas who has done so much to make the OGA50 Round Britain rally a success, and Mike and Marian Shaw paying a presidential visit to the gaffers gathering.

Posted by Bonita: Travels of a Victorian Yacht at 22:41
Email ThisBlogThis!Share to TwitterShare to FacebookShare to Pinterest