This morning at 6 am the visability had cleared a lot and we would have liked to leave harbour for the open sea. The wind would have been on the beam after the first mile or two. However it was blowing so hard that we did not see how we could get Bonita off the pontoon without risking damage to herself or the boats ahead and astern or possibly all three.  I wondered about joining up all our warps and taking a line to the fishing boat wharf on the other side of the harbour to haul her off, but this too could have gone wrong.  We decided that if it was too windy to leave the pontoon then it was probably too windy to leave the harbour. Lighter winds are forecast and we may have another try on this evening's tide. 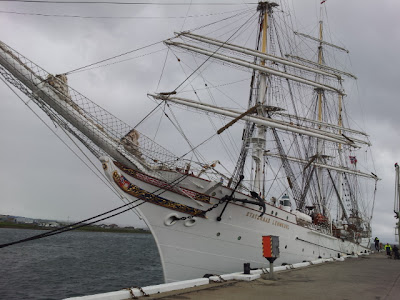 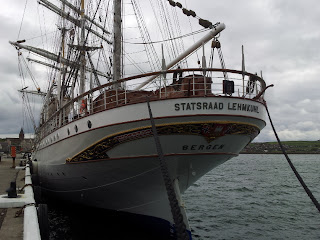 The pictures show a magnificent tall ship that came in under bare poles while we were wondering about how to get out. She is a Norwegian sail training ship, the Statsraad Lehmkuhl.  She seemed to be in immaculate condition with even the paint on the anchor looking perfect. She was  built in 1914 by the Germans as a sail training ship, but passed to British ownership after the First World War. So like the Overlord after the Second World War, The Statsraad probably owes her survival to the fact that as a prize of war that fell into the hands of people who could afford to look after her. She was later bought by the Norwegian navy, but was transiently back in German hands during World War 2.

She dominates the skyline of the town, the second oldest vessel in port.

Posted by Bonita: Travels of a Victorian Yacht at 12:02
Email ThisBlogThis!Share to TwitterShare to FacebookShare to Pinterest
labels: Statsraad Lehmkuhl