There was a tremendous thunderstorm last night with about 1 1/4 inches of rain which was effective at indicating where work was still needed to eliminate the last of the deck leaks.

This morning Geoff and I worked on Calismarde's engine problem, trying to find out how air is getting into the fuel supply. This  included stripping down and cleaning all the injectors. This afternoon we got in a couple of mechanics. They went over all the work we had done and then decided that it was indeed a difficult problem. They went home but promised to be back first thing tomorrow. We remain hopeful, trusting that somehow diesel mechanics have an intrinsic understanding of the problems that afflict engines that we don't.

I looked around the excellent Maritime museum at Karlskrona. There are many exhibits going back to the early days of the Swedish navy, in the sixteen century, but also plenty dealing with the twentieth century. Although Sweden was neutral in both World Wars, it was very much an armed neutrality with many real threats. Sweden was also in the front line in the cold war due to the proximity to the Russian naval bases. 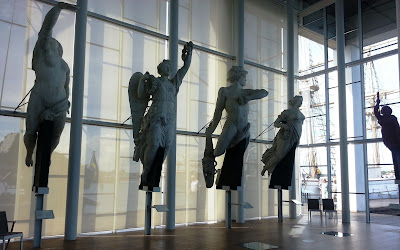 The first picture from the museum is of part of their fine collection of figureheads from 19th century warships.

The second picture is of some original Whitehead torpedoes from the 1880s and '90s. There is a little known connection here with the musical von Trapp family and the problematic Maria. 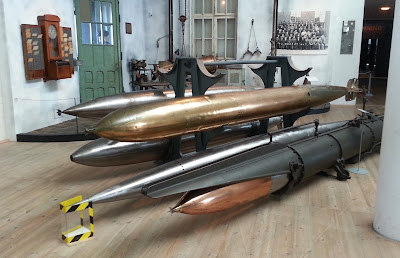 Observant fans of the Sound of Music may have noticed that the von Trapps lived at a rather higher standard than might be expected of the family of a retired naval officer.  Georg von Trapp's first wife and the mother of his 7 children was Agatha Whitehead, the granddaughter of Robert Whitehead, the British born inventor of the torpedo. Agatha married with a significant dowry having inherited the proceeds of the sale Robert Whitehead's torpedo manufacturing company. Agatha died of scarlet fever in 1922.  Captain von Trapp subsequently married the penniless Maria, and lost his first wife's money through unwise investment.  The family was then reduced  to singing and travelling musical entertainment to make ends meet.

We haven't actually lost much sailing time due to our engine difficulties yet, as there have been brisk SW winds that would make it hard to make much progress. We remain hopeful that the mechanical problems can be solved tomorrow.
Posted by Bonita: Travels of a Victorian Yacht at 03:09
Email ThisBlogThis!Share to TwitterShare to FacebookShare to Pinterest
labels: Robert Whitehead, Sound of Music, torpedoes