We filled up with diesel and delicacies from the local delicatessen (no general store) and left the little harbour at Kåseberga. At first we had light head winds but after a couple of hours this increased to quite strong adverse winds so progress became slow, wet and frustrating. We put into the small port of Abbekås, a few miles west of Ystad. A bit disappointing not to have got further but still, around 20 miles in the right direction. We have had westerly winds for ages now and a few days of almost anything else would be quite welcome.

Abbekås is a small harbour with a tight turn in through a very narrow entrance which required a bit of skill with rope, boat hook and fenders as we bought up. There are times when the helmsman feels he has very little control over events as they unfold and is very grateful to have a good crew on the foredeck. 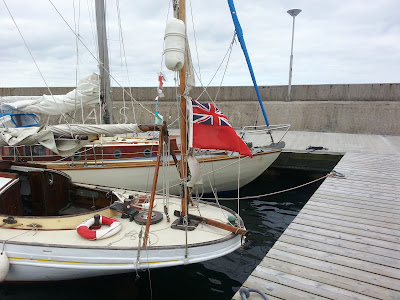 Most small places like to give tourists some reason why they are different from other small places and a bit special. It seems that Abbekås is distinguished as it has more different types of wild roses than anywhere else in Sweden.

As is often the case there are no other British boats in the harbour. We have found the Swedes are often not familiar with the red ensign as the maritime flag of the UK. Even other yachtsmen have asked us what it means. Some have assumed it means we must have come from New Zealand, Australia or Canada. They must have thought that would be quite a long trip for a boat like Bonita. We do our best to explain. In Kalmar we were next to a large yacht flying the blue ensign which added to the confusion further.

This evening the westerly wind is whistling in the rigging, but we hope to make another step in a homeward direction tomorrow.
Posted by Bonita: Travels of a Victorian Yacht at 02:43