Sadly Tim had to leave today and we saw him off at the bus station in Västervik. Tim joined us in Kiel and has been a tremendous help in getting us here and sorting out many problems.
We have to go back to Västervik tomorrow for another crew change, but today we took the boats a few miles to the very small island of Idö.  The buildings on Idö are mostly summer houses, and hardly anyone lives here in the winter - about 5 people we were told.

The first picture shows the boats in the miniature harbour in Idö. It was raining intermittently most of the day but we  walked around the island. 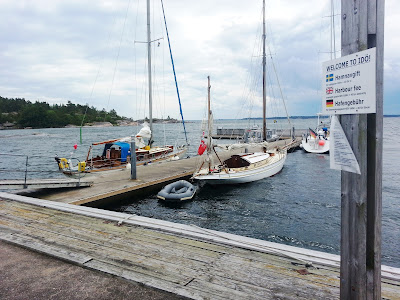 The second picture shows the pilot house which seems to have been more like a coastguard lookout station. There were once lots of these along this very rocky coast but it seems they have all been closed down or automated. 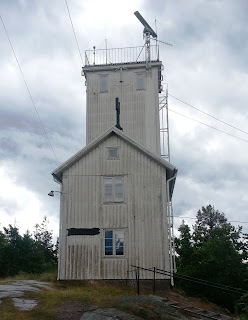 The Idö pilot house was one of the last to close in about 1986. We went up to the pilot's office which has been preserved exactly as it was on its last working day. 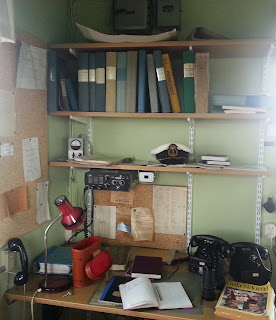 There is a good restaurant on Idö, a surprising find on an island with almost no resident population. There is a small ferry running regularly to the mainland, and it seems people come over just for the evening. No doubt part of the attraction is the fine panoramic view over the sea and nearby islands.

While we were there the little restaurant was  almost filled by an all male works outing from a local manufacturing factory.
Posted by Bonita: Travels of a Victorian Yacht at 02:23