We woke in Norderney at first light - about 4.30am - to catch the tide. The tides in the seegatts between the islands are quite strong and getting them right for both the departure and arrival is a major factor in planning any trip, almost regardless of the wind. As it turned out we had fairly light winds today.

Our initial plan was to stop at Borkum, the most westerly of the German Frisian islands, and a journey of about 40 miles. However the forecast for the next few days is for persistent light to moderate unfavourable winds.

We have several weather forecasts available on the Internet that we routinely look at, and as they don't necessarily agree the natural temptation is to believe the one that tells you what you want to hear. Perhaps it would be wiser to pay most attention to the one that tells you what you don't want to hear. However today they all agreed that the winds out at sea were not going to be good for heading westwards. We therefore decided it would be better to go inland by canal. So we sailed past Borkum, took the fair tide up the river Ems and entered the canal system of North Holland at Delfzijl.

Was this the right decision? With a reasonable breeze it's easier and more satisfactory to make progress by keeping out in the open sea. Canals can be slow and the bridges and locks are demanding for the crew, but you can be sure to be able keep moving regardless of the weather. 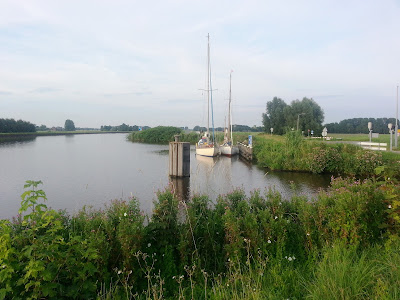 So tonight finds us back in Holland, peacefully moored up for the night in the Eemskanaal, which runs from Delfzijl to Groningen.
Posted by Bonita: Travels of a Victorian Yacht at 23:20
Email ThisBlogThis!Share to TwitterShare to FacebookShare to Pinterest