We left Kalmar this morning after the delivery of fresh bread rolls to the local shop. One of the advantages of sailing where there are no tides is that you can leave port when it suits you, rather than having the structure of the whole day determined by the times of high and low water.
We had a brisk sail into head winds and this evening we are in the miniscule (and very nearly full)  harbour at Kristianopel (population 81) at the southern end of the Kalmar Sound.

Kristianopel is really no more than a village, but it is officially a town. It has a fine church of a size quite disproportionate to the local population even if they all decided to go to church at once. It turns out that Kristianopel was indeed once a large fortified town, but in the seventeen century the town was attacked and the church was the only building not destroyed. 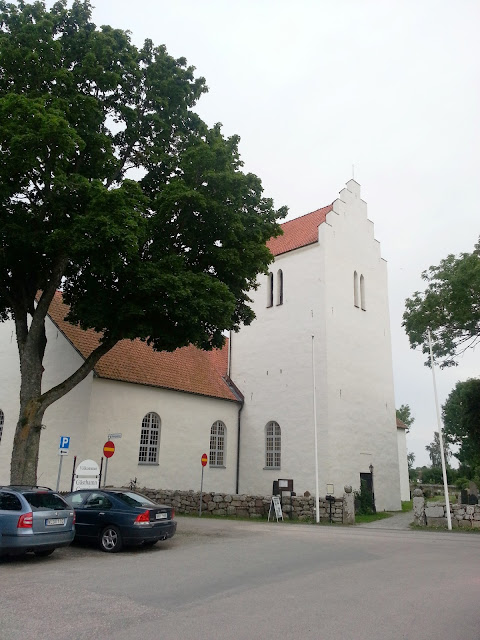 We have been interested to learn something of the local history, since there is hardly any Scandinavian history taught in British schools after the time of the Vikings. Everywhere we have been in Sweden we have found frequent reminders of the effects of the prolonged conflicts between the Baltic states in the seventeenth century.

It is going to take us a long time to get home unless we get a few days of fair winds, but tomorrow's forecast does seem more hopeful.
Posted by Bonita: Travels of a Victorian Yacht at 01:18
Email ThisBlogThis!Share to TwitterShare to FacebookShare to Pinterest