It took the yard longer to get Calismarde in the water than we had expected, but once she was afloat we were relieved to find that she was much better as a result of our hard work yesterday. However by then it was getting too late to go anywhere other than a trial motor around the harbour area.

We visited the Västervik museum. Not surprisingly there have been many shipwrecks in these waters and the museum contains a lot of relics that have been recovered.
Of particular interest is the wreck of the Mars, a 120 gun warship that was sunk in a battle with the Danes and Hanseatic League off Öland in 1564. This makes her roughly contemporary with and of similar size to the Mary Rose which was raised about 30 years ago and is now preserved in Portsmouth.

It is known that at the start of the battle the Mars had become separated from the rest of the fleet and was surrounded; that she was boarded by the Danes during the battle; then sank as the result of a fire followed by an explosion on board. The wreck lies in 75 metres of water and was only found in 2011. I had never heard of her before we visited the museum.

Some items from the Mars have been raised and are being preserved but it is not possible to raise the whole ship. However a lot of archaeological information is being gained by  high resolution sonar scanning combined with composite photography that was not possible a few years ago. From these digital scans 3D printing has been used to recreate portions of the wreck. The pictures show the sort of clarity and detail that can be achieved. 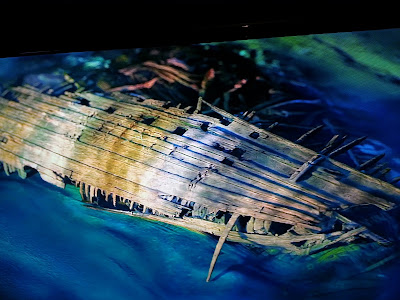 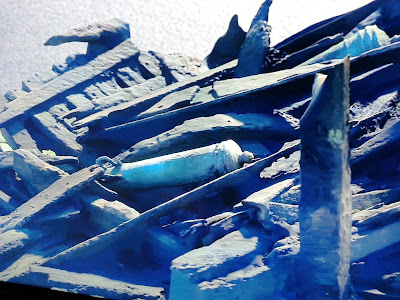 We also visited St Gertrude's church in the town. This dates from the 15th century though most of what we see today is  17th century. The church has box pews - privately rented pews for the congregation. These used to be common in England but are now rare.


We have seen several churches with votive ships on display - ship models given by merchants to bring good fortune. This one was built in 1711, and is one of the oldest we have seen. 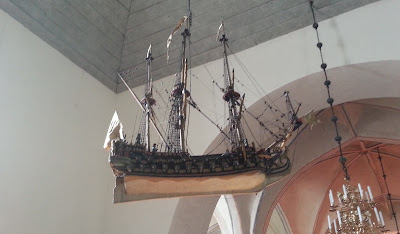 Posted by Bonita: Travels of a Victorian Yacht at 00:43
Email ThisBlogThis!Share to TwitterShare to FacebookShare to Pinterest