We had another day spent in the canals today but plenty of incidents. In the late morning we passed through the canals around the ancient town of Leeuwarden. These seemed to be even more challenging than the canals round Groningen. There are lots of bridges in quick succession, which means that a group of assorted boats of all shapes and sizes gets confined into a short stretch of the canal while waiting for the next bridge to open. Even those with quite manoeverable boats can find this difficult, especially if there is any crosswind. My tactic on Bonita is to tie up temporally to any moored boat alongside the canal untill the the other boats have stopped jostling for position. We have met some quite interesting people who live on  houseboats  like this, and they are mostly very understanding.
Poor Bonita is begining to look a bit travelworn after her long cruise, and several people have asked me if she is made of iron. I think this must be due to the rust stains on the topsides. 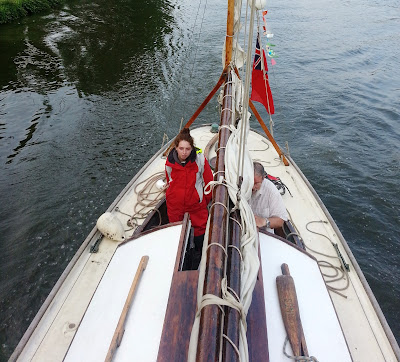 During our journey along the north Holland canals we have seen many lifting bridges sometimes of unusual design. There are obviously many opportunities for creative engineers in this country. The Dutch are renowned for their marine engineering skills. The attached photo shows an example of a lifting bridge where the section of roadway is raised obliquely by a lifting mechanism installed to one side of the road. 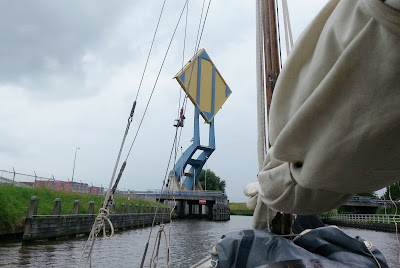 This evening we are moored at a small island in a lake a couple of miles north of Lemmer. The island is a desert island (in the traditional meaning of having no-one living on it, rather than the cartoonist's interpretation consisting of sand and a few palm trees). The girls made supper on Calismarde. At Lemmer we rejoin the open waters of the Ĳsselmeer.
Canals are OK and give an interesting insight into how some people live, but they are hard work. Sailing boats do much better in more open water.
Posted by Bonita: Travels of a Victorian Yacht at 03:29
Email ThisBlogThis!Share to TwitterShare to FacebookShare to Pinterest