Today we had sun and light winds. We left Sandvik and after about 3 hours passed close to Blå Jungfrun (the Blue Virgin). This is an isolated rocky island which is now a nature reserve.   The rocks here clearly show the effects of the glaciers which moulded much of this area until the end of the ice age about eleven thousand years ago. 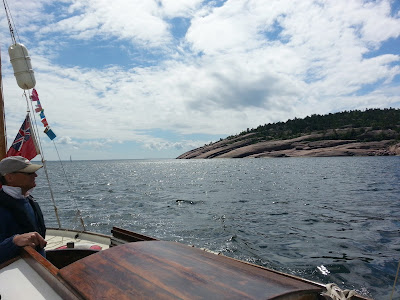 After another couple of hours we entered an area of intricate channels among the rocky islands. This sort of sailing can be unsettling to a yachtsman used to more open waters. The passages between the rocks are narrow, tortuous and require a lot of concentration to sort out the intricate navigation. 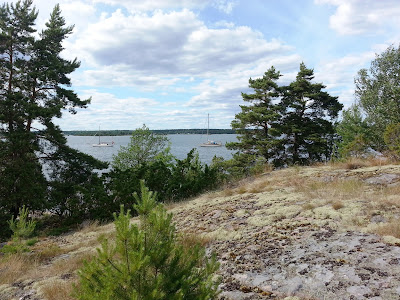 We anchored in a gap between the rocks and after lunch went ashore to one of the islands. It was uninhabited, but there were some derelict buildings with the remains of dinghies, small boat equipment  and various toys. It had clearly been a family summer house at some time, but perhaps fallen into disuse when the children grew up.
We then went to Figeholm, a small village at the top of the fjord. After mooring the boats we visited the Maritime museum. The photo shows Tim, Hugh, Julia and Geoff admiring a collection of old outboard motors. 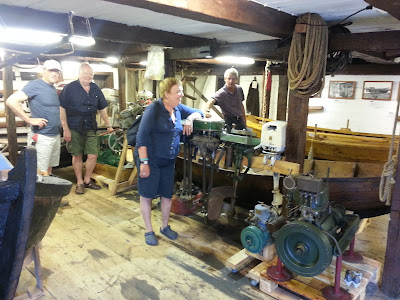 We had a barbecue with Björn, a German who is sailing these waters single handed. Getting even a modern yacht in and out of these small harbours can be difficult enough and we admired the skills of someone who can do this on his own.
The final picture shows a still evening at Figeholm. 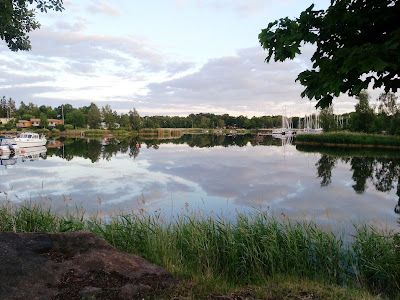 Posted by Bonita: Travels of a Victorian Yacht at 23:26