Kalmar is a good place to change crew with the railway station right next to the harbour. We spent today here as Calismarde is having a crew change: Lawrence sadly had to return home and Hugh and Julia are coming out.  We spent the morning doing assorted odd jobs such as visiting the launderette and touching up chipped paintwork. Its important to have a rest day occasionally to get these things done.

In the afternoon we visited Kalmar castle. This is an imposing castle with a fine position overlooking the harbour and the sound between the mainland and the island of Öland. The castle was originally built in the 13th century. It was greatly improved and expanded in the sixteenth century when it became a royal palace, and to a large extent this is the state in which it has been preserved. Kalmar has always been an important trading port especially for trade with Germany. For many years the Danes occupied southern Sweden so Kalmar Castle was close to the border. Its political importance declined after the 17th century due to boundary changes, and it was used for more humble purposes, such as a distillery and a prison. 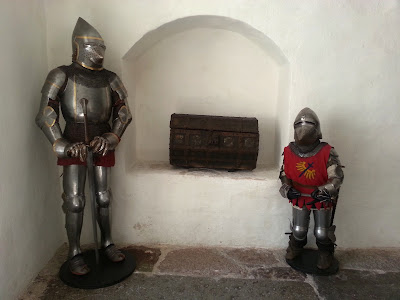 The castle has some spectacular internal decorative woodwork and several rooms have been restored to the state they would have been in during the castles period of importance. There are examples of period furniture and reproductions of the clothes the noblemen wore.  There are also some sobering exhibits from the time the castle was used as a women's prison.

The castle stands in parkland containing some contemporary artworks which invite questions rather than explanations. This third photo shows Tim investigating one of the installations. 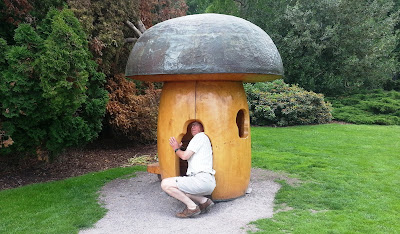 Posted by Unknown at 02:37
Email ThisBlogThis!Share to TwitterShare to FacebookShare to Pinterest