Having tired of the dreadful weather on the East Coast of England we left Harwich at around 9.30 - about an hour before high water. There was a brisk but very cold northerly wind and for several hours we were going at 7 or 8 knots with many reefs in.
At night the wind moderated a bit and a thick fog came down. By this time we were in the middle of the North Sea and surrounded by shipping. We could see nothing - visibility was only a few metres. We saw no ships all night but saw many on the AIS and spoke to several on the VHF radio. We found it disturbing that some ships continued to travel at over 20 knots in these conditions. AIS is absolutely invaluable in making sense of the ships moving around in the murk.
Dave and I emerged with slightly frazzled nerves but otherwise OK. It was very reassuring to learn that ships could see our radar reflector in those conditions. Calismarde had a narrow escape when they nearly hit an unlit and uncharted oil drilling platform.  Harwich to Ijmuiden is about 125 miles and we did this in 25 hours which is reasonable progress.

Visibility had improved to about 1-2 miles as we entered Ijmuiden, but as we motored down the canal to Amsterdam there was a complete climate change. We found clear blue skies, warm breezes and hot weather. People were sitting on the canal bank fishing shirtless and wearing shorts. It began to feel that the journey from the cold and bleak East Coast had been worthwhile. 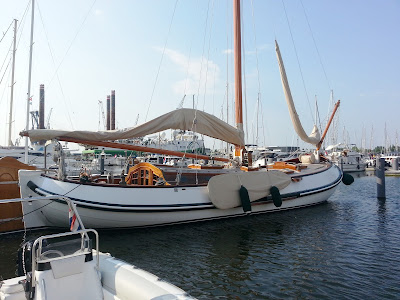 The second picture above is of a traditional style Dutch yacht in Amsterdam marina, it shows how serious the Dutch can be about restoring their classic boats.
At Amsterdam we said goodbye to Tonni who had sadly run out of time but had taught us so much as a professional sailor. The remaining crew felt that despite missing a night's sleep we could not come to Amsterdam without a visit to the old town on a Saturday night.
Posted by Bonita: Travels of a Victorian Yacht at 21:53
Email ThisBlogThis!Share to TwitterShare to FacebookShare to Pinterest