We left the British Kiel Yacht Club this morning and motored out in very light winds. We passed lots of warships of many nations coming up the Fjord for Kiel week.This is obviously a very significant occasion for showing the flag and making formal and informal contacts, in addition to any sporting activity.

We could not identify any Royal Navy vessels but as we passed, Bonita was saluted by about sixty crewmembers lining the rail of a large American warship. It may be that this was a tribute to her - but more likely they were practicing simultaneous saluting by numbers in preparation for the formalities to come.
After a few hours of moderately foggy weather we got to Bagenkop, a small fishing port on the Danish island of Langeland. This is more of a village than a town with lots of neat red and white houses. The Danish currency is the Kroner, but we have none and there are no banks or cash dispensers for miles so the shops take Euros anyway.

The first picture shows Bonita and Calismarde against the background of the town. Both boats are flying their Danish courtesy flags. 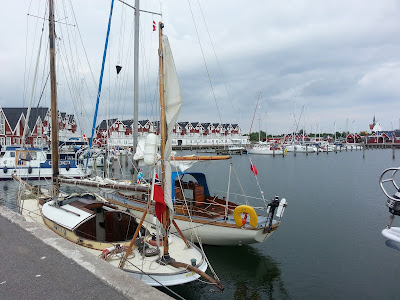 The British are sometimes proud of the bold design and the long tradition invested in the Union Jack, but the Danish national flag (the Dannebrog) is much older than ours. According to legend it came down from heaven to encourage the Danes when things were going badly in a battle with a neighbouring tribe in 1219. They did better after receiving this encouragement. 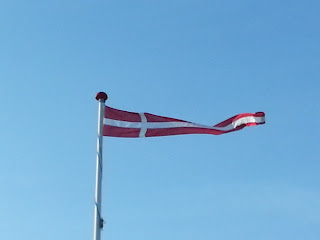 We are here waiting for more crew for Calismarde, but this evening a strong wind came up with spray blowing over the harbour wall. So we may have time  to get to know Bagenkop quite well.
Posted by Bonita: Travels of a Victorian Yacht at 14:52
Email ThisBlogThis!Share to TwitterShare to FacebookShare to Pinterest