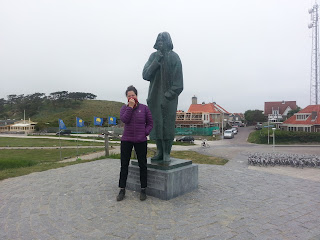 Today D caught up with us coming over on the first ferry from the mainland - she had been delayed by bad weather at Gatwick. Dave who had been with us all the way from the Swale and a tremendous help had sadly run out of time and had to return home.

The day has been spent doing odd jobs and looking around Terschelling. All the Frisian islands are mainly sand dunes, but Terschelling has historical importance as it was on one of the main sailing ship routes into Amsterdam. We can imagine the difficulties heavily laden ships returning from the East Indies must have had negotiating these treacherous waters  and shifting sands  after months at sea. There have been lots of wrecks in the area and the second picture shows some of the many pieces of wreckage that have been dredged up from the sea bed and put on display. 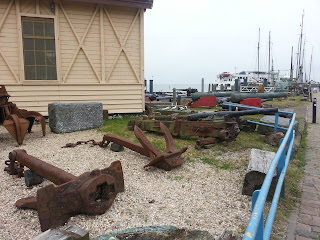 There is plenty of history here. The English attacked the shipping at Terschelling and burnt the town in 1666. In retaliation the next year the Dutch sailed up the Medway to Chatham and captured several English warships, sinking and burning others, one of the worst episodes in our naval history.

Since then relationships have greatly improved and we have been warmly received everywhere. Not many British yachts seem to come to this part of North Holland - we appear to be the only ones in this large harbour.

We hired bikes and cycled round the island. Everywhere there are mysterious installations and other preparations for the large annual arts festival in a few days time. However if the weather is favourable we hope to be on the move before then.
Posted by Bonita: Travels of a Victorian Yacht at 22:09
Email ThisBlogThis!Share to TwitterShare to FacebookShare to Pinterest