There was a fresh breeze this morning and we had to help Bonita out of Vejrø harbour with ropes, but after that we had a fine mostly downwind sail between the Danish islands. Sometimes there are quite intricate channels between the islands needing careful navigation. We passed under two high level bridges joining the islands. The picture shows Calismarde approaching a bridge with 26m clearance. 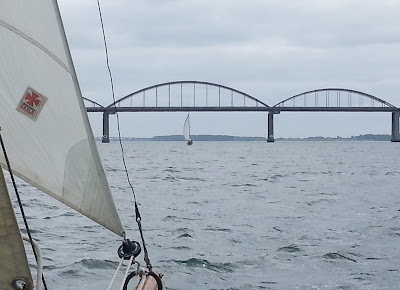 Although there are no tides in the Baltic, there are currents caused by the wind, and these seem difficult to predict. Although erratic presumably it must be these currents that keep the channels free of siltation and prevent the whole area becoming one large shallow sandy lake.
The Danish charts are very good but the topmarks to their buoys are sometimes difficult to make out from a distance. The topmarks are often brushes rather than a solid structure: presumably this discourages birds from perching on the buoy and turning black into white. However these outsize brushes often get deformed and are sometimes missing altogether which can be confusing. 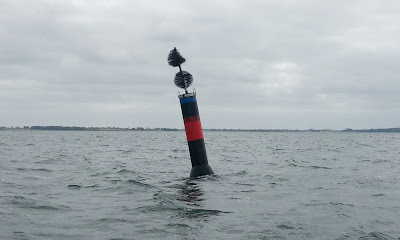 This afternoon we came into the small harbour of Klintholm on the island of Mon. There was a strong onshore wind and the entrance was quite narrow so coming in needed a fair bit of concentration. As so often happens, the waves reflecting from the harbour walls made the sea rougher and more confused in the harbour entrance than further out at sea, which can sometimes be dangerous.
This harbour is at the SE corner of Denmark, and there are several Polish yachts here, which I do not remember seeing at previous ports we have visited. 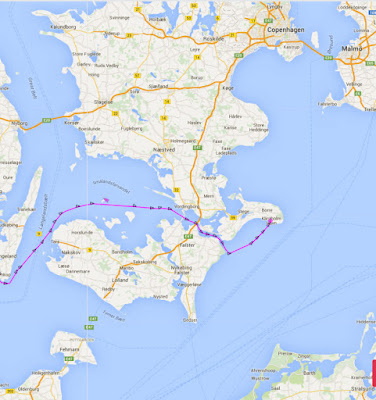 Posted by Bonita: Travels of a Victorian Yacht at 00:51
Email ThisBlogThis!Share to TwitterShare to FacebookShare to Pinterest