Bonita has now left the Eurozone and this evening is floating peacefully in Swedish waters.
We left Mon as soon as we could, having filled up with diesel and visited the local shop. Initially Tim and I had a fair wind sail and the first picture shows us passing the chalk cliffs at the east end of the island of Mon. These come as rather unexpected as most of Denmark we have seen so far consists of low lying sandy islands. You can see the white cliffs of Mon from more than twenty miles away. 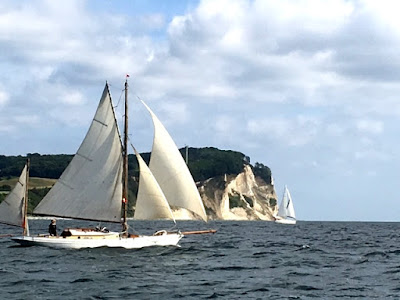 There was a small cluster of boats going from Klintholm to southern Sweden. Our fair wind petered out after a few hours but then we had a reasonable SE breeze and we covered the 50 miles to Ystad in about 10 hours. The picture below shows us tied up in Ystad alongside Westhinder. She is a large and very impressive aluminium yacht, built 3 years ago and sailed by an elderly husband and wife team. 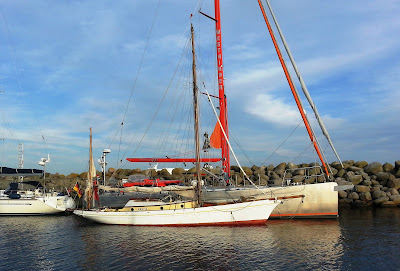 It is noticeable that far fewer people take an interest in old boats here than in either Britain or Holland. There we were always being asked how old she is and details of her history. That doesn't seem to happen so much in Danish or Swedish waters. Maybe they don't have so much of a culture of old boats, or maybe they are just too polite to ask why we are living in such cramped and unsatisfactory circumstances.
It is quite windy tonight but there is satisfaction in being safe in a snug harbour when it is a bit wild outside.

Below is a brief but very clear film of Bonita sailing beautifully this afternoon:
If you have problems with the link above, it is also available on YouTube by clicking here.

As usual, here is our day's track, also showing Calismarde.  The straight lines show where we are out of range of the Internet - the track resuming once we're nearer the shore: 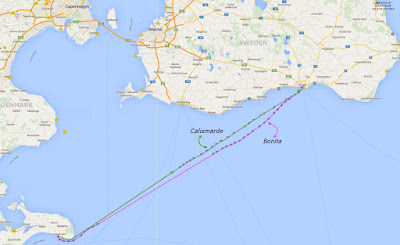 Posted by Bonita: Travels of a Victorian Yacht at 22:53