This morning at Rendsburg Steve had to leave us. He has been a tremendous help on both boats since the start of the cruise. We then motored in calm weather the remaining 30km to Kiel to lock out into the Baltic. The photograph shows Bonita in one of the huge locks at the end of the canal, in much the same position as my little boat Asphodel many years ago. 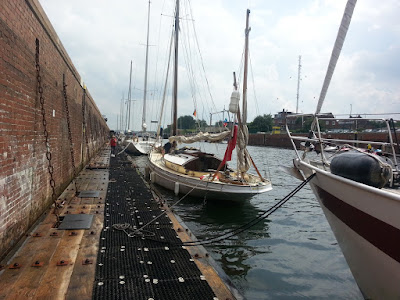 Tim was coming to join us and we had arranged to meet him at the British Kiel Yacht Club, about a mile from the canal entrance.  This club is run by the armed services to provide a sailing club and sail training for the British armed forces, although anyone can use their mooring facilities.  This is very much an island of Britain in Germany, and a curious relic of the days of the cold war when we had many servicemen stationed here.  We were fascinated to see this quaint institution, and as so often, the British abroad can appear more British than those at home.  Sadly the British Kiel Yacht Club is now considered unnecessary and it is being closed at the end of this summer.

This is Kiel week, a major yachting event with many visitors  and in some marinas it can be difficult to find a berth.  In the Yacht Club there were two immaculate 12 metre racing boats. Nearest the camera is Thea, built in 1918 but much altered since.  Beyond her is Vim, built in the US in 1938 to defend the Americas Cup.

Posted by Bonita: Travels of a Victorian Yacht at 14:47
Email ThisBlogThis!Share to TwitterShare to FacebookShare to Pinterest